Enter for a Chance to Win a $500 Commissary Gift Card! 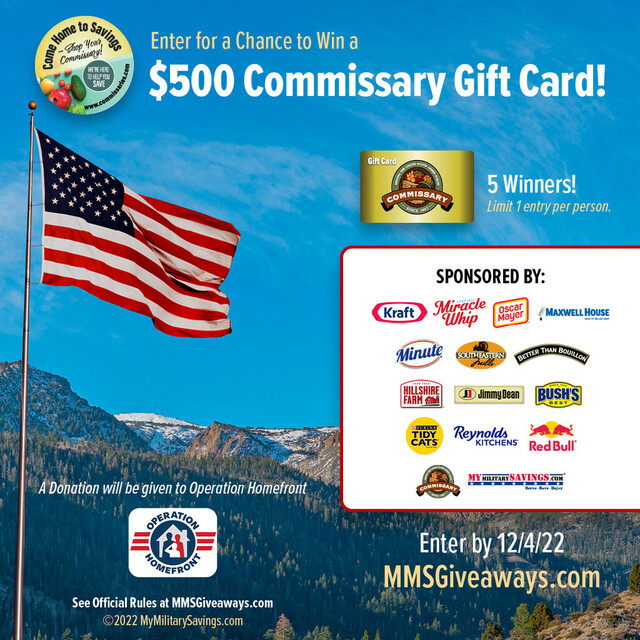 NO PURCHASE NECESSARY TO ENTER OR WIN. A PURCHASE WILL NOT INCREASE YOUR CHANCE OF WINNING. VOID WHERE PROHIBITED BY LAW. EXCEPT FOR THE MARKS OF THE SPONSOR (ADDRESSED BELOW), ENTRY MUST NOT FEATURE ANY THIRD-PARTY TRADEMARKS, LOGOS, TRADE DRESS, OR PROMOTION OF ANY BRAND, PRODUCT, OR SERVICE.

ELIGIBILITY: The MyMilitarySavings.com Honoring Veterans Sweepstakes (“Promotion”) begins on October 24, 2022 at 12:00 a.m. Eastern Daylight Time (“EDT”) and ends on December 4, 2022 at 11:59 p.m. EDT (“Promotion Period”). The time shall be determined by Sponsor’s timekeeping systems, and Sponsor may also rely on the time processing functions of third party applications. Sponsor shall have the sole discretion in determining the timeliness of any action or inaction related to this Promotion. All times mentioned in these Official Rules shall be Eastern Time unless expressly noted otherwise. The Promotion is open to (i) legal residents of 50 United States, District of Columbia and Puerto Rico; or those serving abroad (ii) who are at least 18 years old and the age of majority in their jurisdictions of residence at the time of entry; and (iii) are active duty, reserve, guard, retiree or a family military member of the United States of America’s Armed Forces. Individuals with the following designations are also eligible to enter: Veterans with service-connected disabilities, purple-heart recipients, former prisoners of war and primary family caregivers for Veterans who are enrolled in Department of Veterans Affairs Program of Comprehensive Assistance for Family Caregivers. Void where prohibited. Employees of MyMilitarySavings.com, Inc. (the “Sponsor”), Kraft Heinz, Bush’s Beans, Reynolds Consumer Products, Tyson Foods, Summit Hills Foods, Riviana Foods Inc., Red Bull, Nestle Purina, and their parent companies, subsidiaries, affiliates, advertising agencies, public relations agencies, prize suppliers, including any vendors providing services in connection with this Promotion (collectively, the “Promotion Entities”), and employees, agents, directors, officers (including members of their immediate family – i.e., spouse, mother, father, in-laws, grandmother, grandfather, brother, sister, children and grandchildren – or those living in the same household) of Sponsor or any Promotion Entities are not eligible to participate in the Promotion. Promotion is subject to all applicable federal, state, and local laws.

TO ENTER: To enter this Promotion, complete the following steps during the Promotion Period: Scan the QR code or visit www.MyMilitarySavings.com (the "Web Site") during the Sweepstakes Entry Period and click on the icon or banner to access the Giveaways entry page. Follow the online instructions to complete the Official Online Entry Form and submit as instructed to register for sweepstakes. Any attempt to submit more than ONE entry using multiple/different email addresses, identities or any other methods may void that entrant’s entry. Entries generated by a robotic, programmed, script, macro or other automated means will be disqualified. No other forms of entry are valid other than set forth above. All entry information becomes the property of the Sponsor.

Entries that are not responsive to Sponsor’s request as described in these Official Rules may be disqualified in Sponsor’s sole discretion. Sponsor is not responsible for lost, late, misdirected entries, or entries not received regardless of cause. In the event of a dispute over who submitted an entry, the entry will be deemed to have been directly submitted by the authorized account used to enter the Promotion. The authorized account holder is deemed to be the natural person who is assigned to the account by the relevant entity responsible for assigning those accounts. By entering and/or participating, entrants agree to be bound by these Official Rules, Sponsor’s Privacy Policy as set forth in these Official Rules.

By submitting any entry or entries, you also grant to Sponsor the worldwide, perpetual, irrevocable, fully sub-licensable, and freely transferable right, but not the obligation, to use any and all names, identities, titles, likenesses, distinctive appearances, physical likenesses, images, portraits, pictures, photographs (whether still or moving), screen personas, voices, vocal styles, statements, gestures, mannerisms, personalities, performance characteristics, biographical data, signatures, and any other indicia or imitations of identity or likeness listed, provided, referenced, or otherwise contained in the entry and/or image (all attributes, collectively, per person, a “Persona”) for purposes of advertising and trade, in any format, medium, or technology now known or later developed without further notice, approval, or compensation, unless prohibited by law.

WINNER SELECTION: On or about December 12, 2022 after the conclusion of the Promotion Period, MyMilitarySavings.com will select by random drawing five (5) potential winners from among all eligible entries received during the Promotion Period. Odds of winning will depend on number of eligible entries received. The selected winners are subject to verification of eligibility and compliance with these official rules. Limit one (1) prize per person.

GRAND PRIZES: Each of the five (5) potential winners will, upon verification of eligibility and compliance with these Official Rules, receive a $500 Commissary gift card. A total of five (5) gift cards will be awarded under this Promotion. The maximum ARV of all prizes to be awarded is $2,500. All prizes are awarded “AS IS.” Neither Sponsor nor Promotion Entities make or offer any warranty or guarantee, either express or implied (including, without limitation, quality, merchantability and fitness for a particular purpose) in connection with this Promotion or any prize. No issuer of any offered prize is sponsoring this Promotion. Event tickets are subject to the terms and conditions of their respective issuer. Prize details and availability are subject to change, in which case a prize of equal value may be substituted at Sponsor’s sole discretion. Prizes consist only of the items listed, are non-transferable, with no cash redemption or substitution except at Sponsor's sole discretion. Sponsor will determine all prize details (brand, model, size, color, etc.) in its sole discretion. Federal, state, or local taxes on prizes, if any, and any other costs, fees or expenses not listed above are the sole responsibility of each winner.

PUBLICITY & MARKETING: Submission of an entry and/or photo in the Promotion constitutes permission to the Sponsor to use entrants’ name, identity, title, likeness, distinctive appearance, physical likeness, image, portrait, picture, photograph (whether still or moving), screen persona, voice, vocal style, statements, gesture, mannerism, personality, performance characteristic, biographical data, signature, and any other indicia or imitation of identity or likeness for purposes of advertising and trade, in any medium, without further notice, approval, or compensation, unless prohibited by law. Submission of contact information in connection with this Promotion (whether or not required), including, without limitation, mailing address, phone number, email address, during entry constitutes permission for Sponsor to use entrant’s personal information for purposes of administration of the Promotion. You also may opt-in to be added to Sponsor’s customer database and to permit Sponsor to contact you in the future for promotional and other reasons. You may opt-out of receiving such communications as set forth in Sponsor’s Privacy Policy (located at www.mymilitarysavings.com) or as provided within any such marketing materials (e.g., using the “Unsubscribe” feature provided in the footer of Sponsor’s e-mails). You understand that you are providing your information to Sponsor. The information you provide to Sponsor will only be used in accordance with Sponsor’s Privacy Policy.

NO LIABILITY & INDEMNIFICATION: By entering this Promotion, you agree to release, discharge and hold harmless Sponsor, MyMilitarySavings.com, Inc., Promotion Entities, and their respective directors, officers, employees, agents and assigns (the “Released Parties”) from any claims, losses, and damages arising out of, or relating to, your participation in this Promotion or any Promotion-related activities (including, without limitation, the event) and the acceptance and use, misuse, or possession of any prize awarded hereunder (including, without limitation, any misrepresentation made by you in connection with the Promotion; any non-compliance by you with these Official Rules; claims brought by persons or entities other than the parties to these Official Rules arising from or related to your involvement with the Promotion; acceptance, possession, misuse or use of any prize or participation in any Promotion-related activity or participation in this Promotion; any malfunction, error or other problem arising in connection with the collection, processing, or retention of entry information; or any typographical or other error in the printing, offering or announcement of any prize or winner). The foregoing includes, without limitation, any claim for personal injury, property loss or damage, or death arising in any way in connection with the Promotion.

OTHER TERMS: Decisions of Sponsor on all matters related to the Promotion are final and binding. Sponsor reserves the right to cancel or modify the Promotion for any reason, including but not limited to, if fraud, misconduct or technical failures destroy the integrity of the Promotion, or if a computer virus, bug, or other technical problem corrupts the administration, security, or proper administration of the Promotion as determined by Sponsor, in its sole discretion. Sponsor reserves the right to disqualify or prohibit the participation of an individual if fraud or tampering is suspected, or if the individual fails to comply with any requirement of participation or with any provision in these Official Rules. CAUTION: ANY ATTEMPT TO DELIBERATELY DAMAGE OR UNDERMINE THE OPERATION OF THIS PROMOTION MAY BE A VIOLATION OF CRIMINAL & CIVIL LAWS. SPONSOR RESERVES THE RIGHT TO DISQUALIFY AND/OR SEEK DAMAGES FROM ANY INDIVIDUAL MAKING ANY SUCH ATTEMPTS TO THE FULL EXTENT PERMITTED BY APPLICABLE LAW.

GOVERNING LAW & MANDATORY ARBITRATION: Any disputes arising under this Promotion and/or these Official Rules will be governed by relevant U.S. federal statutes and regulations and the internal laws of the State of California. Sponsor and each entrant agree that any such claim or dispute between the parties, or between a party and any agent, employee, successor, or assign of the other, related to this Promotion and/or these Official Rules (including the applicability of this arbitration clause) shall be resolved by binding arbitration administered by the JAMS under its rules and procedures in effect when the claim is filed. The rules and procedures and other information, including information on fees, may be obtained from JAMS’ website (www.jamsadr.com) or by calling JAMS at 949-224-1810. Any award by the arbitrator(s) may be entered as a judgment in any court having jurisdiction.

RIGHT TO DISQUALIFY: Sponsor reserves the right to disqualify or prohibit the participation of an individual if fraud or tampering is suspected; if the individual fails to comply with any requirement of participation or with any provision in these Official Rules; if the individual’s behavior or communication at any point is disruptive, may or does cause damage or to any person, property, or reputation of Sponsor, or is otherwise not in accordance with all applicable laws and generally accepted social practices as determined in Sponsor’s sole discretion.

SEVERABILITY: If any provision(s) of these Official Rules are held to be invalid or unenforceable, all remaining provisions hereof will remain in full force and effect.

NO AFFILIATION: This Promotion is in no way sponsored, endorsed or administered by any other named or depicted people or entities other than Sponsor. Any questions, comments or complaints regarding the Promotion should be directed to Sponsor.